The use of virtual reality in business has been a hot topic over the last year, with a wealth of both corporate grade and consumer level products launched by major manufacturers. Here we look at how virtual reality will be used for business in 2017 and beyond to transform staff training, sales & marketing, system optimisation and more. 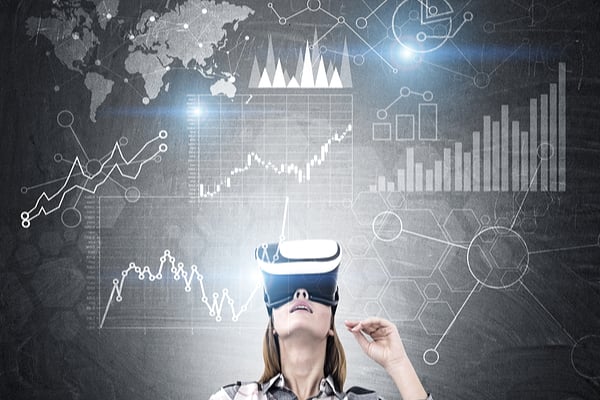 VR devices like Google Cardboard have offered consumers a low cost peek into the possibilities of the technology, more sophisticated offerings from Samsung and HTC have captured the mid-range, and immersive dedicated devices from Sony and Oculus are gaining traction. However, so far, the focus has mainly been on virtual gaming.

This is likely to change over the next year, as virtual reality hardware and software evolves, and interest from early adopters translates into adoption by the mainstream market, which is projected to be worth over $120 billion by 2020.

The potential applications for VR are widespread, and the potential benefits to businesses are significant.

Experiential marketing is key for companies launching new products or seeking to build brand loyalty, and virtual reality opens up a world of possibilities when it comes to giving potential customers a “hands-on” experience.

Car manufacturer Audi recently tested a virtual dealership where customers could view and interact with any one of the many models available, as well as instantly customise the virtual car to their own specification, choosing paintwork, interior leather, alternate wheels and other options.

NBC used virtual reality to allow fans of hit show “The Voice” to sit alongside the judging panel, watch performances and give feedback. Using VR allowed NBC to connect with many more fans than would have been possible with a purely physical experience.

Last year, Coca-Cola created a virtual reality “Santa’s Sleigh Ride” which allowed consumers to experience a flight around the world, and have even issued a guide to creating a simple VR headset from one of their multipack boxes paired with a mobile phone.

As more and more consumers have access to virtual reality devices in their home over the coming year, we can expect marketing departments to come up with increasingly innovative uses of the technology to bring their products and brands to life and engage a new generation of consumers.

In a recent survey in the US, 80 to 90% of respondents indicated a preference to work remotely at least some of the time, and it’s estimated that as many as half of all jobs are currently compatible with “teleworking”. This could be further increased with the use of virtual reality as it develops to the point of accurately replicating real-world interactions.

Currently, remote meetings are carried out by conference calls, or video conferencing, but there are many issues with these technologies, including technical glitches, lack of non-verbal communication leading to misunderstanding, interruptions and delays due to the need to repeat material.

The Dark Side of Video Conferencing

A virtual environment where participants were able to see one another’s movements, postures and position, as well as hearing their voice and seeing their facial expressions would much more accurately mimic a face to face meeting. In addition, the technology could allow participants to jointly view discussion materials in three dimensions, such as engineering plans, new product designs or even graphs and charts.

With the cost of equipment dropping rapidly, 2017 could see virtual meeting rooms start to replace Skype, Google Hangouts – and the trusty conference call.

It can often be difficult for people to visualise complex processes in a way that allows them to best optimise and improve them. VIrtual reality simulations have the potential to allow employees to “step inside” a process, whether that’s a physical one such as a production line, or a conceptual one such as a flowchart or process diagram.

Being able to “physically” move around and navigate within this virtual space can open up new ways of thinking about processes and allow employees to develop innovative and creative improvements.

Where virtual reality really has the potential to make changes is in the training industry. The ability to place trainees in immersive, high-quality simulations which accurately depict real world scenarios is invaluable, particularly where a live version of the training would be prohibitively expensive, dangerous or impossible to replicate.

Of course, these kind of simulations are already successfully used in certain sectors. For example, flight training for commercial pilots, the military and surgical training on virtual patients. However, the cost of developing the simulation and deploying the correct equipment have previously meant that the cost of this type of training has been inaccessible for non-specialist training programmes.

Immersive emergency drills – for example in a hazardous environment, such as an oil rig or nuclear power station, where it would be impossible to accurately simulate an emergency in real life. Participants could face life-threatening situations and learn to react appropriately without endangering their safety.

Skilled trades such as welding or carpentry can benefit from a virtual training environment that allows trainees to repeat specific exercises over and over again without wasting valuable materials, and replay their working process to spot areas where they might be going wrong.

Combat training for law enforcement officials can be replicated much more safely in virtual reality, and allows trainees to test out the result of different responses to a specific scenario, with the opportunity to analyse their decisions later.

Virtual reality is also ideal when training employees to service or repair complex and sometimes dangerous machinery, and can provide an in-depth, annotated view of the physical components in a way that isn’t feasible in reality.

As virtual reality in business will no doubt become increasingly common, with technologies being used to enhance staff and customer experiences. We can expect that the next twelve months will see forward thinking businesses begin to deploy VR in many of the ways discussed above, and learn more about how to refine their virtual strategy along the way.

Businesses who do not respond as quickly face the risk of being late to the party as consumers increasingly adopt the new technology as a primary method of interacting with brands, and employees demand the quality and breadth of training opportunities that VR is able to demonstrate.