What is the Internet of Things or IoT?

The Internet of Things is the global network of devices and sensors that can be remotely accessed and controlled via web-based and mobile technologies.

The Internet of Things or IoT is a phrase that’s been much discussed over the last few years – often with the implication that it’s the next big thing, but equally often without defining exactly what it means. There are multiple interpretations of what precisely the phrase represents.

An oft repeated example is the “Smart Fridge” – usually described as a fridge which could sense when you’d run out of milk, and text you to remind you to pick up a pint (or presumably order it from Ocado on its own). The idea of home automation is certainly at the heart of the Internet of Things, but envisaged in more subtle ways than this. 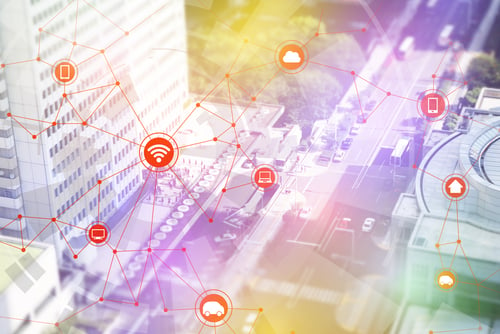 Although it’s often spoken of as a future phenomenon, the Internet of Things is arguably already with us, albeit still in its infancy. Examples of technologies in use or in development which conform to this idea include:

Probably the most familiar example of the Internet of Things at the moment is the wealth of tracking applications for iPhone, Android and Windows Mobile devices. A smartphone is, as well as being a computing device, a personal set of sensors able to measure things like location, orientation, movement and even temperature and altitude.

Personal tracking apps to measure daily exercise or quality of sleep are already popular downloads, and pairing smartphones with wearable devices like smart watches or wristbands allows even more detailed data capture. There are also applications already on the market for tracking vulnerable people, such as apps that would send alerts if an elderly relative had not moved in some time, remotely monitoring the sleep patterns of your baby, or tracking your child’s journey to and from school.

Major energy companies such as EDF Energy, British Gas, E.ON and others are already offering customers ‘smart meters’ which send usage details to the company automatically, and also allow users to control their lighting, heating and other home systems remotely via a smartphone app. In the same space are firms like Enlighted, which offers a smart home lighting system, and Nest Labs, with their intelligent home thermostat.

As well as streamlining the billing process, and giving users more detailed control over their energy usage, these type of systems have huge benefits for the environment by drastically reducing waste, and allowing more intelligent planning of the supply and demand of electricity on a regional scale.

Companies such as AdhereTech and Vitality GlowCap are pioneering the use of smart medicine bottles which detect when a pill or dose of liquid has been removed. If patients miss a scheduled dose, the bottle can send reminders via text message or phone call. The data recorded can also be aggregated anonymously to provide healthcare organisations with a big picture view of how and why patients miss doses.

It’s estimated that as few as 40% of patients stick rigidly to the correct dosage schedule when prescribed medication, which can result in unnecessary illness, and therefore an avoidable drain on healthcare resources. This type of smart technology therefore promises benefits for both healthcare providers and end users.

Heapsylon, a partly crowdfunded startup based in the US, has developed a range of smart sports clothing, including socks, sports bras and T-shirts which incorporate flexible electronics and pressure sensors to provide real time cues to users on posture and performance. The idea is to reduce strain injuries caused by, for example, poor running form. In a similar vein Intel are currently developing a smart shirt, and competing products are expected from industry leaders Nike and FitBit.

KisanHub provides a range of outdoor sensors and monitoring equipment which can be deployed across farmland to measure and report on weather conditions, crop growth, soil nutrients and irrigation. This data is fed back to the farmers central computer where a dashboard style layout gives an overview of the farm and also allows automated actions such as planning irrigation schedules.

For livestock, sensors can monitor the movement, activity and wellness of animals remotely to allow farmers to identify sick or injured animals from a mobile device, rather than physically patrolling the property. One organisation using this technology to good effect is EOIT in Spain, whose Smart Horse and Smart Farms programmes which have revolutionised health care monitoring, sports training and asset tracking, as well as data collection and analysis.

GPRS and satellite asset monitoring specialists, Succorfish M2M, are leaders in asset tracking systems for fisheries and other marine organisations. Their software provides live, global tracking data that is accurate to within two metres worldwide. This enables monitoring of the security and performance of vessels and other valuable assets, and crucially, helps to ensure the safety of personnel working offshore.

From litter bins to streetlights, many of the day-to-day objects we encounter in our cities are gradually being given a “smart” makeover. From the solar powered Big Belly litter bin which compacts its own waste and automatically alerts city workers when it needs to be emptied, to recording pollution data at extremely local levels via AirCasting, to optimising inner city parking with apps like ParkSight from Streetline, there’s a lot going on behind the scenes when it comes to making cities work for us.

From a safety perspective, networked sensors can also be deployed to monitor the structural health of buildings, bridges and other structures, providing timely warning in the event of a potential failure. This technology can also be used for severe weather, pollution or fire warnings, targeted to the specifically affected areas.

IoT Security concerns are a point of issue, with the possibility of critical systems such as traffic controls, physical access to buildings, or electrical and heating systems being subject to the same danger of hacking or exploitation as our phones and laptops are now.

We have already seen disruptive attacks involving the IoT that are no doubt the first of many. Unsurprisingly, the big names leading the march towards security and standardisation include Google, Microsoft, IBM, Cisco and Amazon, pursuing a more effectively connected “Internet of Things” but seeking influence and ownership at the same time.

What does IoT mean for the future?

The IoT means that with continual improvements in sensor miniaturisation and flexible electronics and battery technology, we can expect the Internet of Things to grow as costs simultaneously fall. It’s certainly an area which has attracted a huge amount of investment in research and development already.

Connecting the world in this way also comes with concerns however. As it stands, there is no universally agreed standard or protocol for how different products and services connect with each other, so one worry is that the proliferation of this technology may create what’s been termed a “bundle of remote controls” – that is, users having a large collection of different applications to interface with different services and sensors.

The next five to ten years will likely see the Internet of Things become a redundant term, as the public becomes used to the ubiquity of connectivity in each product or system with which they interact. Along with virtual and augmented reality, the Internet of Things looks set to further blur the lines between technology, communication and the physical world in which we live.